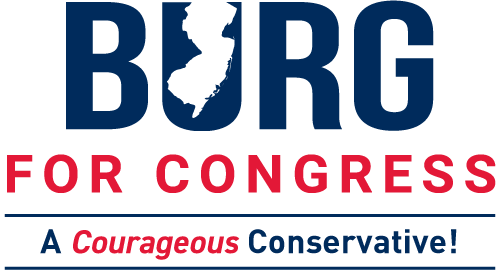 Who is David Burg?  David Burg is not a politician.  He’s an outsider with no connection to the NJ political establishment.  David is running because he’s had enough of the woke Democrat agenda that is destroying our country.  And he’s outraged by feckless Republicans who – in the face of this radical onslaught – refuse to defend our cherished American values.  So David is stepping up to preserve, protect, and defend our beloved country.  “At this dire moment we need STRONG Republicans who understand this unprecedented challenge and will FIGHT for our precious Constitutional Republic!  That is exactly what I will do when given the honor of representing the people of CD4 in Washington, D.C.”

David has been a successful business litigation attorney for over three decades.  He has advised business leaders on a wide variety of issues and knows our laws and Constitution.  More importantly, David is a devoted husband and father of three sons (ages 20, 18, 17).

David Burg is not looking for a political career:  David has had a satisfying legal career.  He is not looking for a new one.  In any event, David believes political service should not be a career.  People should represent their fellow citizens in Congress for a limited time and then return home, making way for new leaders to step forward with fresh ideas and approaches.  That is what our brilliant Framers had in mind when they created Congress as a representative body.

For this reason it is well past time to bring the incumbent’s 4-decade career in politics to an end.  “The last thing we need are career politicians like the incumbent who bring virtually no life experience outside of politics to their important decisions about our country.  Even worse, Congressman Smith’s repeated betrayal on critical votes – including his support for Pelosi’s woke ‘infrastructure’ bill and her outrageous January 6 ‘select committee’ – makes clear that, after 40 years and 21 terms, we need a new voice representing New Jersey’s 4th Congressional District in Congress.  In fact, Congressman Smith is walking, talking evidence of why we need term limits.”

Common Sense America with Eden Hill. Kitchen Table topics focus on a weary taxpayer, the Obiden schemes, and Meg’s “Woe is me” campaign.

https://youtu.be/AlINPAL3U9w Common Sense America speaks with Charles Brandt, a Young Voices contributor, speaking to his most recent article in The Federalist featuring a "weary taxpayer and the Biden student loan schemes".. Cited in the article..."In this country,”...

Common Sense America with Eden Hill talks about our Constitutional rights under the Biden Administration, Moms for America, and the new Republican Congress.

Today on #CommonSenseAmerica, your #KitchenTable topics include "mailbox fishing" this Christmas rush, Harry and Meg's "woe is me" on Netflix, from New York to Florida, the mass exit for #Freedom; the 64.6 Million #Freelancers and the new regs from Biden's Dept. of...